How to Make a Stranger Feel Like a Million Bucks

A few weeks ago I attended a LinkedIn customer event in Sydney and literally bumped into a famous Australian athlete. His name is Kevin Sheedy. He's a well known former player and coach in the Australian Football League. I immediately shook his hand and told him he gave a great speech, expecting him to quickly move on to other fans. He had spoken at the event earlier in the day to a large crowd and based off of the crowd's enthusiastic reaction, there were a lot of people eager to say hello and take a selfie with him. He did not move on quickly though. In fact, we chatted for over 30 minutes. When we finally parted ways, I felt like million bucks. As I look back on our conversation there were several thing that he did to make me, an American who knew nothing about the sport he has committed his life to, feel like a million bucks. While we don't all possess the natural charisma that Kevin has, there were some basic things he did that can help anyone engage a stranger in a conversation that will leave them feeling uplifted.

Ask questions. Shortly after I introduced myself, he started peppering me with questions about my life. He took a sincere interest in me as person. He asked where I was from, what I did for a living, how I liked Australia.

Bring energy to the conversation. It had been a long day. I was tired, but Kevin's energy was contagious. I left the conversation having channeled some of his energy and feeling ready to take on the rest of the day.

Be authentic. He was so authentic that it made me feel very comfortable, even though at first, I was very flustered to be speaking to someone who has accomplished so much.

Answer each question with sincerity. He treated each question I asked the same, even the really ignorant ones. I even asked him if played or just coached. Turns out he has played or coached in over 929 games, he's even in the Hall of Fame. He did not act annoyed or insulted, he just answered with an enthusiastic, "yes, I played too." 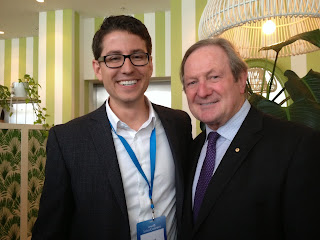 Each time we meet a stranger, we have an opportunity to have an impact on that person and leave them feeling uplifted. I hope this experience gives you a few ideas how you can do that, because what Kevin taught me that day in a 30 minute conversation is not a lesson I will soon forget.
Posted by Derek Pando at 4:49 PM 3 comments: