Takeaways from a Tech Marketer’s First Semester of Policy School

I just wrapped up the first semester of my MPA program. This fall, I purposefully chose several tech focused classes. After spending my whole career in Silicon Valley working as a marketer, a big reason I came back to school was because I wanted to see technology from a policy and public good lens and boy was it eye opening. If you want a quick crash course on what I learned, here are a few key takeaways that I thought were most eye opening in no particular order. My two classes that helped shape these thoughts were “Solving Tech’s Public Dilemmas” with Ash Carter (Former US Secretary of Defense). Technology and the Public Interest with Latanya Sweeney (Former CTO of the FTC).

1. The glory days of border less technology are ending. The internet is segmenting and it will become harder and harder to do business across borders as countries move to regulate the internet more aggressively. Some of this is driven by privacy and security concerns but there is a whole lot of nationalism in the mix as well. The internet in each country is becoming a stronger reflection of the political system of each country, especially in authoritarian countries. The costs of going global are increasing dramatically.

2. Technology is neutral, but at its best has unintended consequences and at worst is a weapon. Overall we were taught to look at technology to see the balance of the good it brings and the bad. There are many sectors like social media where society is starting to feel like there is too much bad for the good it creates. On the unintended side you see bias, discrimination in algorithms and unintended mental health consequences. As a weapon you're seeing state sponsored misinformation attacks, cyber attacks on infrastructure and more effective ways of making war.

3. Facebook is public enemy number one. The one company that got brought up the most in my classes was definitely Facebook. Facebook has lost control of the narrative in public sector discussion circles, they are everyone’s favorite punching bag. Interestingly enough even those most adamantly against Facebook do not seem to be quitting their products, especially Instagram and Whatsapp (The de facto messenger of choice at Harvard’s Kennedy School). I think as employees in technology you have to look at the company you work for and ask yourself if you believe the impact of your work will be a net positive. I have many friends I respect at Facebook, but in policy circles it is viewed more and more like big tobacco.

4. Regulation for Social Media is extremely difficult in a Democracy. We had several projects where we had to write policy memos about how to regulate aspects of social media and it was extremely difficult. I most often toiled on the assignment until I had no choice but to pick an argument not because I thought it was the solution, but because it was a decent idea and the assignment was due, but hey, maybe that’s politics? :) This dilemma is extremely obvious in American politics where you see how Democrats want to fight misinformation and Republicans want to fight censorship. Both parties have social media in their cross hairs, but for different reasons. Political gridlock will likely keep the status quo for a while so I won’t hold my breath for big changes anytime soon.

5. The government has been WAY more involved in making great technology than I understood before. One of the most eye opening things was learning about how the US government has systematically invested in different technologies, especially post World War II. Seeing this chart below really puts things in perspective. If we want to maintain our technological edge as a nation we need to continue to invest. Governments can invest in ways and time frames that the private sector will not. Silicon Valley likes to take a “we built this” attitude, but under the hood you see the fingerprints of government dollars and research. 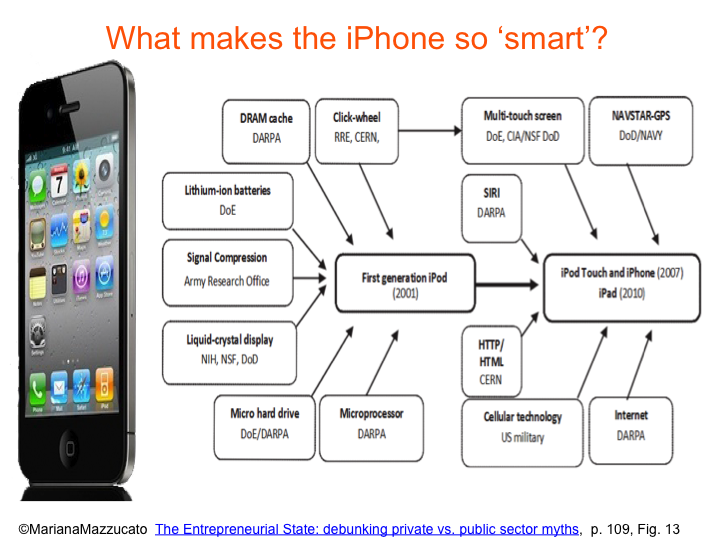 6. When it comes to Cybersecurity, no one and nothing is safe. Frankly, the internet was designed for sharing and collaborating and it’s foundation does not make security easy. There are battles actively being fought in Cyberspace, but it’s extremely messy. It’s hard to know who your enemy is and the red lines are less clear. I attended a lecture with one of the US’s Cybersecurity agencies and you could sense that it’s the wild west of warfare right now. As more of our lives goes online, the more potential reward there is for people to hack you. After learning about all the scary stuff in Cyber security I’ve made lots of changes to how I use the internet.

7. If you think social media can mess up society, wait until you see what’s happening in biotechnology. This is an area I knew nothing about coming into grad school. When we covered this section I was shocked at how close we are to doing some things in bio tech that could have an incredible impact and grave consequences. Designer babies are right around the corner as well as germ line editing, which means making changes to human DNA that are HERITABLE. Future generations could be biologically impacted by decisions that are made now. So many moral and ethical questions facing our society in this rapidly expanding field.

8. Large tech companies and employees will have to choose sides. During my time working in Silicon Valley it seemed like everyone wanted to stay neutral to sell into as many markets around the globe as possible. My perspective was that many in Silicon Valley saw themselves as “global citizens” and above any allegiance to one specific country. Personally, I still believe in the institution of the United States as an imperfect force for good in the world. It is going to get harder and harder to stay neutral. Frankly, for America to maintain its technological edge, we need those in the valley to be on team America or at least team democracy.

9. Crypto lacks a killer use case and has a government hammer hanging over it. I did not fully understand the importance of a monetary system to a country until we dove into crypto. Specifically for the United States, we’ve used our status as reserve currency in many ways to benefit us when it comes to foreign policy. I don’t believe the United States or any world power will give up that power. It does not matter if it’s decentralized, if you live in a country that has borders, laws and a tax man there are a thousand ways that can make sure they maintain control. I think there is a place for crypto, but don’t believe it will be the decentralized utopia many crypto fanatics paint.

10. China China China. I could write 10 blog posts about China. Freedom of speech and freedom of religion are extremely important to me. That tends to be the case when you are the son of a Cuban immigrant that fled communism under Castro. Overall, if there is one country that is working the hardest to surpass America when it comes to technological superiority, it’s China. They are making insane investments in automation, A.I., Cyber and every other up and coming field of science. It is admirable how they’ve tamed social media to reflect their system of government. China’s ability to monitor, surveil and control their citizens is the scary stuff of 1984. I believe that a stronger and a technologically superior China will make the world a less free place and that is cause for major concern. The US cannot take its technological superiority for granted. China seems to be hoping we do.

There was so much more, but these are just a few things fresh on my mind.
Posted by Derek Pando at 7:23 PM